Advertisement
Manchester City came from 1-0(isco) down to beat Real Madrid 2-1 in their Champions League round of 16 first leg.
The Manchester city champions scored two late goals to secure a crucial advantage ahead of the round of 16 second leg.

FULL-TIME | AMAZING WIN! WHAT A PERFORMANCE!

Isco opened the scoring at the Bernabeu after slotting past Ederson in the 60th minute. But the visitors hit back thanks to Gabriel Jesus and Kevin De Bruyne.
City's Brazilian forward headed home his side's equaliser in the 78th minute before De Bruyne made it 2-1 from the spot five minutes later.

The vital away goal from Gabriel Jesus, the first from an English side in the knockout stages.

Brilliant work from Kevin de Bruyne for his 1️⃣7️⃣th assist of the season for Man City ???? pic.twitter.com/ExQC71JUcO

Real Madrid's misery was compounded in the 86th minute as Sergio Ramos was shown a straight red card for fouling Jesus.
Man city are the only English team to win their round of 16 tie following Spurs, Liverpool and Chelsea's defeat to RB Leipzig, Atletico Madrid and Bayern Munich, respectively.
The Blues entertain their Spanish counterparts in the second leg on March 17 for a spot in the Champions League quarter-final. 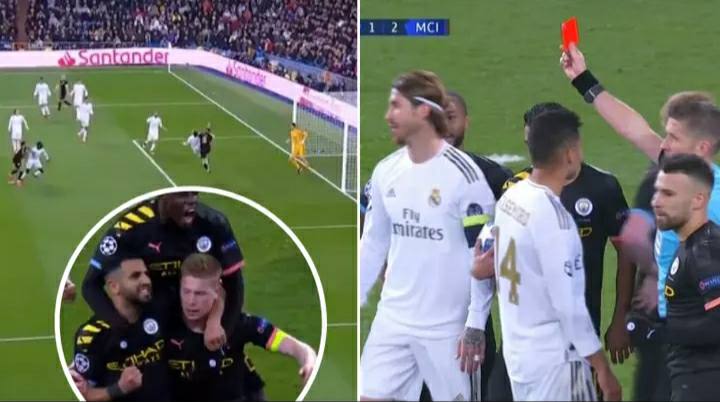 Top 50 football manager of all time