Trent 21 year old put in a great performance when Liverpool play against Leicester at the King Power Stadium on Boxing Day 27/12/2019.


The Alexander-Arnold one of the best , right-back proved he had a better delivery than Santa Clause by setting up the Reds' first three goals and firing in a late fourth.

The young right-back defender was a masterclass from the young defender as Jurgen Klopp's side moved 13 points clear at the top of the Premier League with a 4-0 win.


And he celebrated his late goal with what has become Kylian Mbappe's trademark arms folded celebration, too.
He put in an inch perfect cross in the first half for Roberto Firmino to head the newly-crowned world champions in the lead.
Liverpool should've been more than one ahead, and were forced to wait until the 71st minute to get the second goal their play deserved.

19 - Since the start of last season, Liverpool's Trent Alexander-Arnold has provided 19 assists in the Premier League, more than any other player. Talent. #LEILIV pic.twitter.com/TbQATc6ZXW


Alexander fizzed in the corner which Caglar Soyuncu quite literally couldn't handle as the ball bounced up and hit his arm.


James Milner slotted home the penalty to give liverpool the breathing room they needed heading into the last twentty minutes.


And victory was all wrapped up three minutes later when Alexander-Arnold fizzed in a low cross from the right which Firmino controlled and placed into the top corner for his second goal.


And the arnold perfect night was complete 12 minutes from time when he was fed by Sadio Mane on the counter-attack, and rifled in a low shot into Kasper Schmeichel's bottom corner.


Alexander-Arnold officially ended up with one goal, two assists and the man of the match award on Boxing Day.


He has racked up 19 assists since the start of last season, the most of any player in the Premier League in that period.

do you think Arnold  best player right back in the world ? 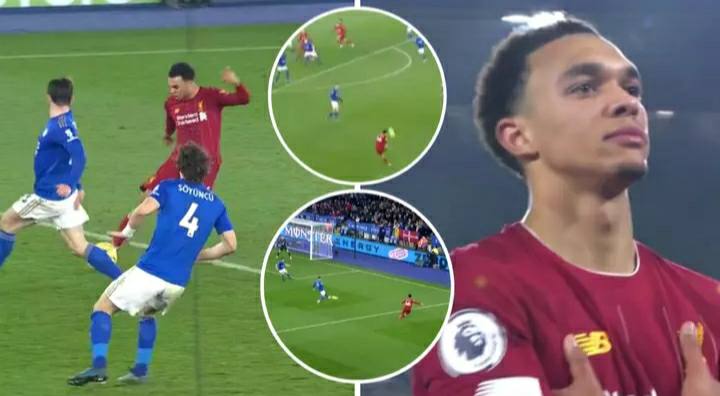