goalkeeper city Produces Save Of The Season Contender Against Crystal Palace

Manchester city ran out 2-0 winners at Selhurst Park with the visitors keeping a clean sheet thanks to their brilliant international brazilian stopper who produced a great save 'save of the season' contender.
Exactly In the 76th minute, Benteke the highest to win a header from inside the box and his effort looked destined to hit the back of the net.
But the international brazilian had other ideas and clawed the ball out in. watch this video :


????BACK WITH A BANG...? Almost!@chrisbenteke off the bench for @CPFC and he almost scores a trademark powerful header - brilliant save from Ederson! ????


Ederson proving he is much more than a sweeper keeper - what a save that was! #MCFC


Gabriel Jesus and David Silva ensured citizen victory in first half .with this victory city move up to second place with 19 point. 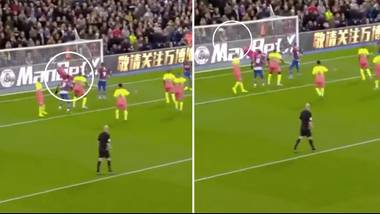