Aaron Wan-Bissaka continues to impress in pre-season as he won 100% of his tackles and interceptions, while producing a incredible recovery tackle in red devills latest pre-season game versus Inter Milan.


This recovery & tackle from Wan Bissaka, is insane ???? #mufc pic.twitter.com/BpRCHn8NxU

The young player was superb against Inter Milan as United secured their third straight pre-season win. Aron played a huge role in his side's victory. He won all his tackles and interceptions not to mention producing a moment of defensive brilliance.
And the England U21 international played a short pass to his teammate with the opposition breaking on a counter-attack.
But he showed good job of recovery as he chased down Dalbert before performing an immense sliding tackle. Manchester united fans loved aron showing in Singapore. Here's some reaction from social media:


Ole Gunnar Solskjær was also full of praise for the £45 million summer signing.

Ole Gunnar Solskjær said about aron "aron is one of the best upcoming defenders in the Premier League," " continue said : He has the right work ethic, talent and mentality to play for Manchester United and he fits exactly the type of player that we are looking to bring into the squad to help us improve and push on further.

Aaron is a young, hungry player and eager to learn and that's important at his age.
"I am delighted he has signed with us and we look forward to continuing his tremendous development so far." Man united resume their pre-season with a game against spurs Totenham in Shanghai on Thursday. The man united kick-off their Premier League campaign against Chelsea on August 11.

This recovery & tackle from Wan Bissaka, is insane ???? #mufc pic.twitter.com/BpRCHn8NxU 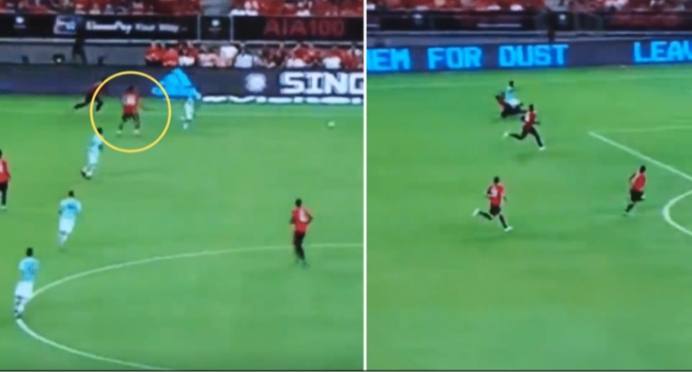