Gunners have agreed a deal to with french club lille to sign Nicolas Pepe for a total fee of €80 million euro. Arsenal had been pushing hard to sign the international of Ivory Coast and have now been able to make an arrangement with the club whereby they will pay the sum in installments.
As per the reliable Ornstein, The gunners have beaten Napoli to his signature and will tie the 24-year old down to a five-year deal at the arsenal if negotiations with the player's agent run smoothly.
Advert


Arsenal have reached an agreement with Lille to sign Ivory Coast winger Nicolas Pepe for ~€80m, paid by instalments to fit #AFC budget. 5yr deal, agent agreement still needed but set to be closed in next 24/48hrs. Napoli also have agreement with #LOSC but agent rejected proposal

#Arsenal more about Pépé: no problem for the total agreement between clubs (€80M + add ons), talks ongoing with the player to complete personal terms. Arsenal are confident about the deal. Everything confirmed ????⚪️???? #AFC #Arsenal #transfers


the 24-year old enjoyed a stellar campaign in France last season for Lille as they finished second to Paris Saint-Germain. He found the net 22 times, with only Mbappe managing more goals in the French top flight.
Pepe also laid on 11 assists for teammates to bring his total contributions to 33 in 38 games.


???? | L'Équipe are reporting that Arsenal have agreed an €80m fee with Lille to sign Ivory Coast winger Nicolas Pépé.

???? | The 24-year-old was set to join Napoli earlier in the week but now looks like he will be heading to North London instead.#AFC pic.twitter.com/ZpZdsYyrA1

If gunners are indeed able to agree terms with Pepe's agent, he will become manager Unai Emery's fourth signing of the summer after the arrival of 18-year old Brazilian Gabriel Martinelli from Ituano, William Saliba from Saint Etienne in a £27 million move and the loan signing of Dani Ceballos from Real Madrid 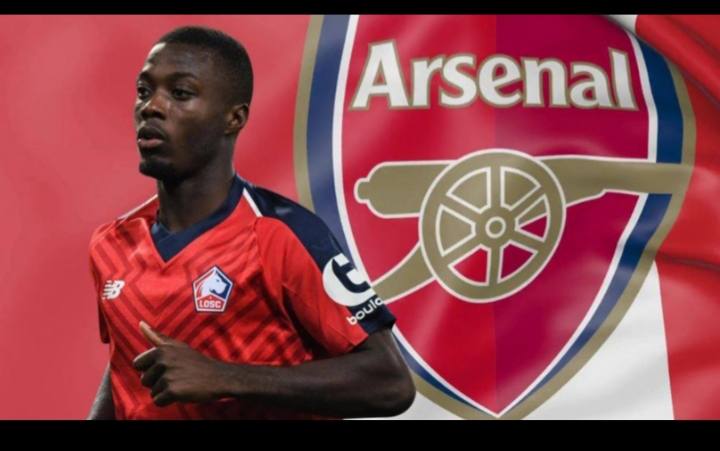