After 12 year waiy for copa america .brazil win copa america after beating peru in maracana 3-1.
After great work from player of manchester city gabriel jesus on the right everton soares opened the scoring in the 15th minute.


Put some respect on Gab's name for this assist and then put even more respect on Everton for this finish! pic.twitter.com/oE7Ntk5LNb


Soares player of gremio :The 23-year-old, who plays his football at Gremio, has been a revelation at this summer's tournament, scoring three goals.
Then against the run of play, Ricardo Gareca's side equalised in dramatic fashion. All-time top goalscorer Paolo Guerrero netted just before half time when Thiago Silva was judged to have handled the ball in the penalty area.


Paolo Guerrero sent goalkeeper Alisson the wrong way to make it 1-1.
Moments later it was that man Gabriel Jesus who restored Brazil's lead. Tireless work from Roberto Firmino, who ran back to the half way line to retain possession, was key as Arthur provided an inch perfect pass in the final third. Jesus has been in scintillating form under Tite and Sunday's performance against Peru topped off a wonderful tournament for the 22-year-old.
Brazil continued to dominate in the second half, with Philippe Coutinho pulling the strings from midfield to attack. But in the 70th minute, the game was thrown on its head when Man of the Match contender Gabriel Jesus was sent off for a second yellow card.
Pictures soon emerged of the Brazilian in tears in the tunnel. Brazil were then awarded a penalty in the final minutes and substitute Richarlison made it 3-1.
Tite's side managed to cling on with 10 men to secure their first Copa America trophy since 2007.
The National Team of Brazil has shown the best football of this Competition. Four great strengths: Speed, Technique, Collective Game, Individualities. Congratulations for representing South American Soccer so well 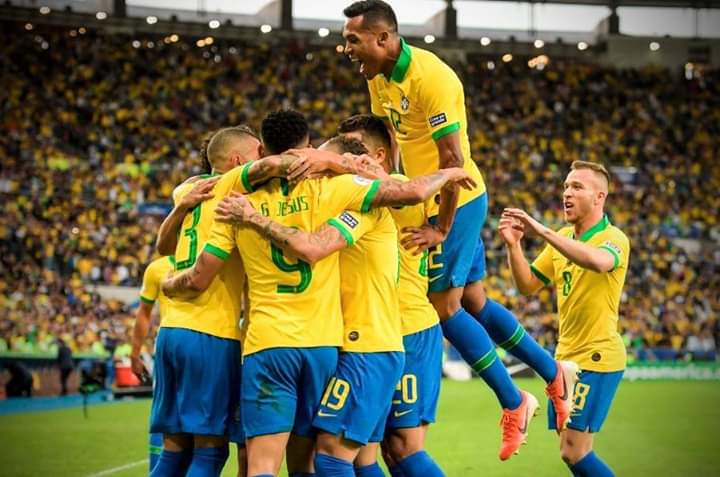